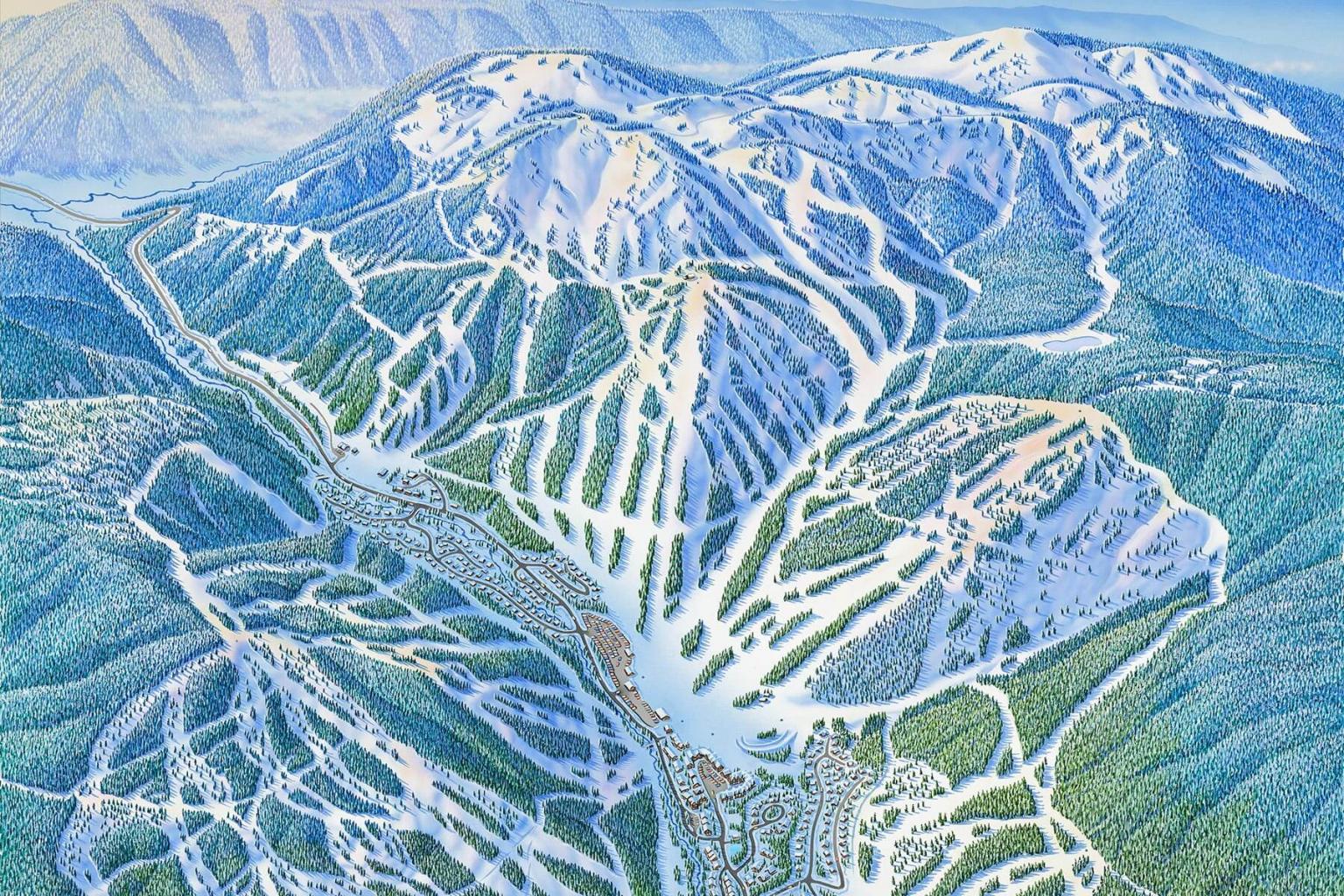 There is something special about trail maps. What started as humble collections of lines to help people find their way around the local hill have now morphed into a cornerstone of ski culture, adorning the walls of luxury chalets and ski bum share houses alike. How many wide eyed wanderers have stared at the iconic painted peaks of legendary resorts over the years, dreaming about the turns they could make there one day? That little folded piece of paper in your pocket is like a treasure map pointing the way to the best runs, the deepest stashes, and the route to the bar at the end of the day.

Keen eyed skiers and snowboarders who joined us on the slopes this past season will have noticed that we introduced a brand new trail map, proudly displayed around the resort for winter 2019/20. While our previous map served us well for years, terrain expansions, new lifts, and other changes around the resort meant that it was time for a fresh look on Canada’s second largest ski area. With the decision made to update the map, there was only one person we trusted to continue bringing our three peaks to life: legendary trail map artist James Niehues.

The resulting new map guided guests around our trails all winter and we want to give you a special peek behind the scenes at how it was created:

The 2019/20 edition is the fifth trail map that James Niehues has created for Sun Peaks over the years, stretching back to his first visit in 1993. While James has hit the slopes of Sun Peaks in the past, describing the view from amongst the snow ghosts at the top of Tod as his favourite part about skiing here, he didn’t make the trip north from his home in Colorado this time. Instead, he relied on aerial photographs to create the new piece.

To help us obtain the photos that James would need, we enlisted local Kamloops photographer Kelly Funk to capture images of every inch of the resort. On a sunny December morning, Kelly strapped himself into the passenger seat of a helicopter and methodically photographed Mt. Tod, Mt. Morrisey, Sundance, Orient Ridge, the village, and the valley from every angle over a couple of hours. With hundreds of high-resolution photos to use as a guide, the final map portrays every run, bowl, and glade in the resort in as much detail as possible for skiers.

“I’ve been up in helis on multiple occasions with the camera on a variety of commercial and tourism jobs but this was the first time I was in the air for Sun Peaks Resort, and also the first time doing mapping/quadrant work. I’ll be honest, I was a bit nervous due to the fact that this was an entirely different end result needed; not emotive images for the most part, but repetitive back and forth while descending, hoping to cover not just Tod and Morrisey mountains, but the village and entire resort as well if possible. Failure would have been very costly! Luckily it wasn’t too cold that day as my hands were outside the shooting window, and once we got into the rhythm I felt comfortable with the content and it started to get fun. Then I found myself relaxing and enjoying the fantastic perspectives that you could only get from a chopper." - Kelly Funk, Photographer

The village was magical!

While mapping the terrain was the main objective, Kelly was also able to switch to a more creative mind frame for part of the flight in order to capture some stunning aerial shots for us:

Once the photos were complete, it was over to the piste Picasso to work his magic. Niehues has enjoyed the challenge presented by painting Sun Peaks over the years, describing it as the most difficult trail map in the lineup of almost 200 resorts that he’s worked with.

“The most compelling thing about your mountains is that they're probably the most difficult mountains that I’ve ever done, to get all the trails on one view. Because of Morrisey of course. You’ve got to view it from an easterly direction and of course that means the runs on the west side of Morrisey, like Wringer, In Tatters, and Static Cling, are really, really difficult to get on a single view.” – James Niehues, Trail Map Artist

Along with the usual challenge of showcasing all three of our mountains at once, James also tackled some other tricky spots in the latest incarnation of the map. These included the addition of the new Orient chairlift and showcasing how the bases of Orient and Morrisey converge, as well as capturing a more accurate view of Gil’s. His skill as an artist shines through in his ability to create an image that showcases the variety and expanse of Sun Peaks from an aerial angle, while also providing an effective tool for skiers to orient themselves at ground level.

In order to arrive at his finished painting, Niehues worked through several stages. First up, he created an initial sketch of the scene to review with the Sun Peaks team. This process took around a week and a half. Once everyone was happy with how the new map looked, he spent a day painstakingly transferring it onto an illustration board, making sure to trace things accurately until every last run, building, and tree was in the right position. Finally, it was time to paint the map, a process that took James approximately three weeks to complete.

Wondering which part of the painting took the longest? The trees! While James uses a technique in his paintings that saves him from painting every single tree individually, it still takes plenty of time to accurately portray the lush forests that blanket our mountains.

You guys have got a lot of trees. I kind of like the New Zealand ski areas, you know, there are no trees.

Aside from his work with us, James was a busy man in 2019 with the release of his stunning new book The Man Behind the Maps, which features over 200 of his trail map paintings from around the world. You can order the book or see more of his work on his website.

Once the painting was ready, it was time to hand things over to the Marketing team here at Sun Peaks Resort to apply the finishing touches. While constant reviews of the map were part of the process from the get-go, now was the time to double, triple, and quadruple check the map to make sure it was as accurate as possible. The help of many sets of eyes from the Marketing, Patrol, and Outside Operations teams ensured every run was present and accounted for.

The file was then passed over to the Resort’s graphic designer, who spent over 15 hours digitally adding in a coloured route and name label for each run, mountain by mountain. After more rounds of reviews, the labels for on-mountain facilities, ski-in directions, and more were added as the final piece of the puzzle. Months of work were finally complete and the new map was ready to showcase Sun Peaks Resort to the world!

“In this newest rendition of our alpine trail map, it was important for us to capture the terrain developments we’ve seen take shape over the past several years - Gil’s coming in-bounds, further build-out of the West Morrisey trails, and most recently, the connection of Orient Ridge terrain via the Orient chairlift. Jim was able to enhance and more accurately depict these areas while continuing to showcase the 360 degree flow of our terrain around the village, which is one of our more unique and appealing features.” – Christina Antoniak, Director of Marketing & Communications at Sun Peaks Resort

As Canada’s second largest ski area with 4,270 acres, it’s incredible that this map portrays the size, scope and variety of our terrain in a single snapshot.

Fan of the new map? You can pick up a copy in Guest Services or at other locations around the Resort when you visit next winter. If you’re after something more permanent, the team at Alpine Images Photography in the village have available various pieces of wall art featuring the new map and will also take custom orders.

A big thank you to James Niehues, Kelly Funk, and everyone else who helped make this project possible!