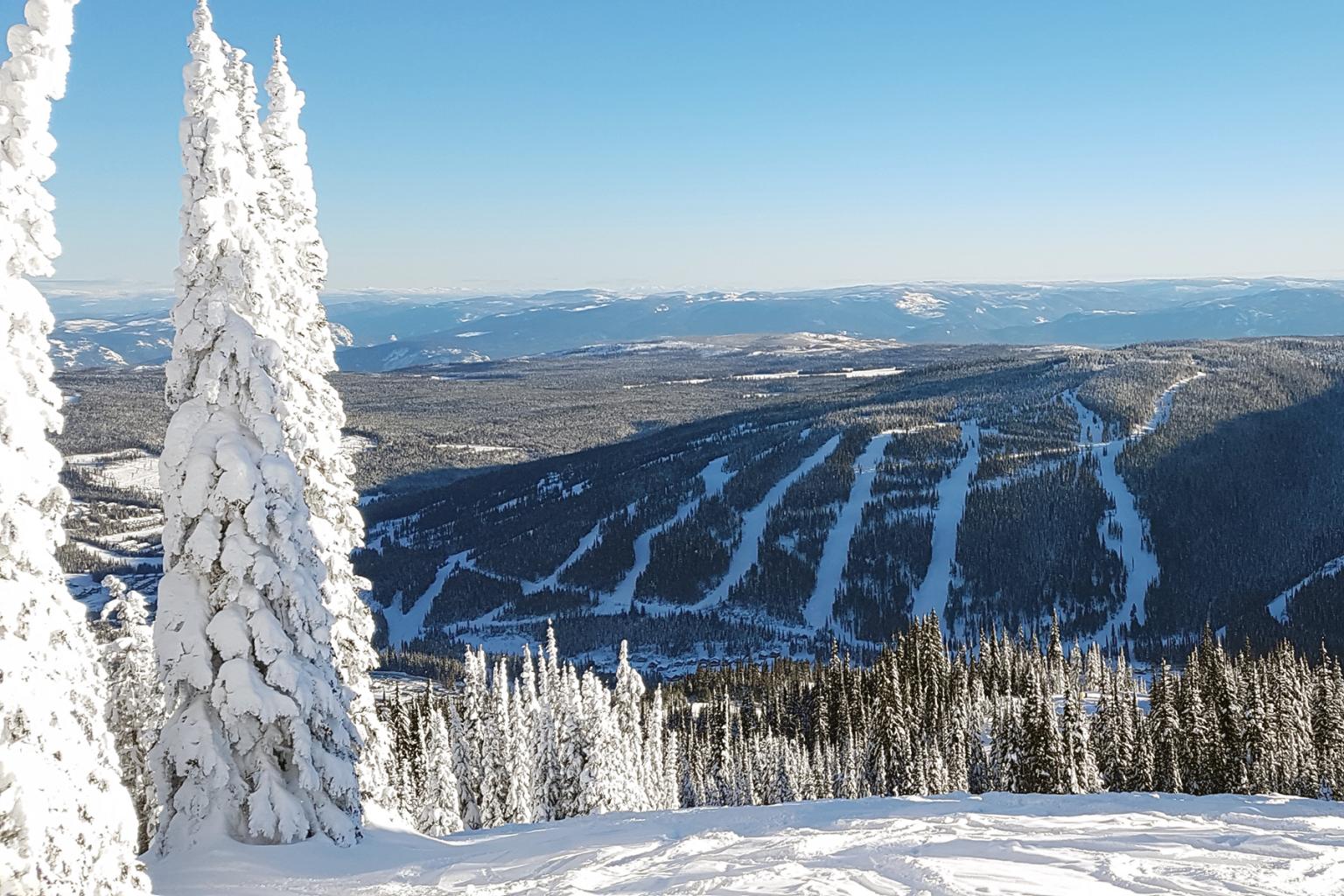 At one time, very early in my ski career, a visit to the Laundromat was an unpleasant experience. I’d trundle there, usually in the evening, with a ridiculously overstuffed bag of clothes, my pockets full of change for the machines and armed with the knowledge that I would probably have to spend hours avoiding eye contact and awkward conversations with a multitude of ‘interesting’ folks. People who, like me, weren’t fortunate enough to live somewhere with their own washer and dryer. Fast-forward a few years and I no longer get laundry day anxiety thanks to the forward thinking team at Sun Peaks Resort. The sweet, steep, ridiculously fun terrain on Mt. Morrisey, collectively known as the ‘Laundromat’, has made laundry day feel less like work and a whole lot more like playtime. (View of Mt. Morrisey's Laundromat section shown in image above, as seen from Tod Mountain. Photo by Krystal Kehoe)

There’s no argument, Morrisey is a gem. Generally less people on this side than Sun Peaks’ other two mountains, the aspect is northerly, so the snow stays dry late in the year, but what I love most is the layout and flow. It’s somewhere you can go and rip five or six runs in a short period of time and come away feeling challenged, spent and satisfied. In fact, I’ve gotten it down to a routine that leaves me smiling every time. First run is a warm up, one of the wide-open groomers, something like 'Mid-Life Crisis' or 'Showboat' to get the blood flowing. Then you start banging off the bump runs, 'Static Cling', 'Agitator', 'Spin Cycle' and 'Cover Shot'. These are all steep, challenging, leg-burning, black and double-black runs that add a sense of gnar to the mountain. Ski any of those runs top to bottom and your legs will be screaming like a teenager at a Katy Perry concert.

However, if it’s a pow-day ignore everything I just wrote, including taking the warm-up run, and head straight to 'Lint Trap', 'Tumble Dry', 'Wringer' and 'In Tatters'. These runs deliver some of the most epic in bounds powder skiing I’ve had at Sun Peaks, in all honesty, I can’t believe I’m sharing this. It’s like telling everyone about that awesome, uncrowded surf spot that you’ve been keeping all to yourself. At some point though, sharing is caring, and there’s most definitely enough space for everyone. 'In Tatters', the newest run on Morrisey to be developed, is named for recently retired mountain operations manager, Jamie Tattersfield. It was Jamie’s vision that assisted in leading much of the run development and layout. His namesake run is a fitting tribute, it’s steep with a consistent fall line that will test your skill and endurance.

There are a couple of ways to work the terrain over here, depending on the amount of powder and your personal froth levels. When the snow is epic my favourite tactic is no stopping until valley bottom. That leaves a short hike on a cat track, which gets you to the Morrisey Platter and then to the chair for wash, rinse, and definitely repeat. If a little hike isn’t your thing, jump on the 'Static Cling Return' and you’ll hit the traverse to the Platter without the walk. There’s talk of a lift in here in the future but trust me, don’t miss this area. It really is worth the effort. And since I’m giving away all my best local secrets, here’s one more; if you want to find convenient parking and hit the Morrisey Chairlift right away, park in P5 and you’ll be a step ahead everyone else.

The other day I caught up with my friend Duncan. His youngest boy had blown him off to ski with his buddies so he and I headed over to Morrisey for a few runs together. Duncan is from Scotland, I’m originally from Cape Breton, we both have the gift of the gab and usually it’s non-stop chatter on the chair and non-stop skiing when we get off. This day wasn’t any different but one silent moment that stood out was on the top of 'Spin Cycle'. It’s a super fun double black, with a flat run-in that rolls over and gets steeper than a cow’s face. The thing that makes this run a Western Canadian classic is the view, it really is stunning. Before the run rolls over you are looking across the valley at Tod and Sundance mountains and in the afternoon sun it’s hard not to be awestruck. We were, and we’ve seen that view 1000 times.

We came back to reality, dropped into the run and were side by side in the bumps, neither of us wanting to admit that the lactic acid was making the legs scream for mercy. At the bottom we looked at each other and asked, “Another?”. Stupid question, the answer in this Laundromat is always yes!