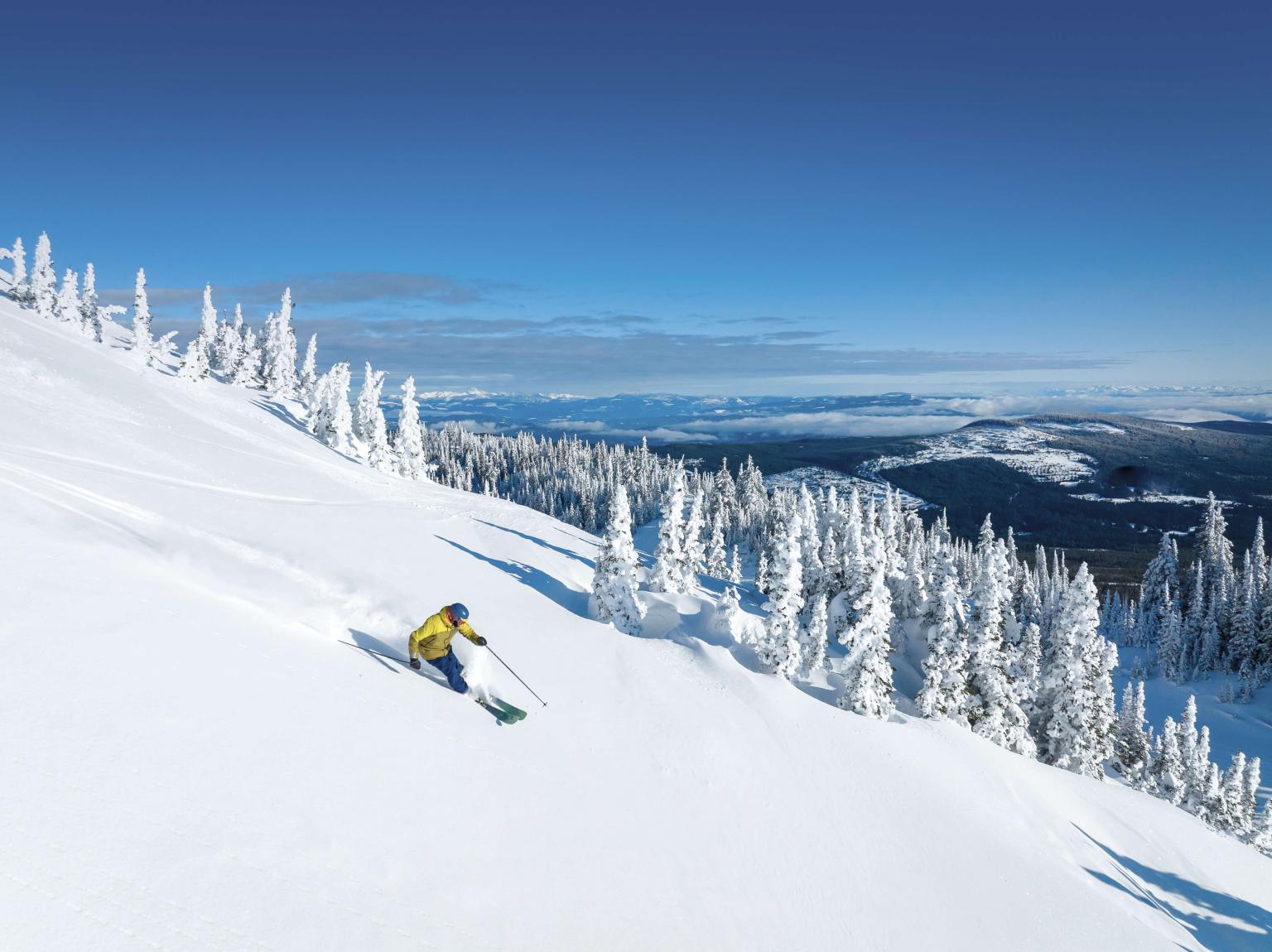 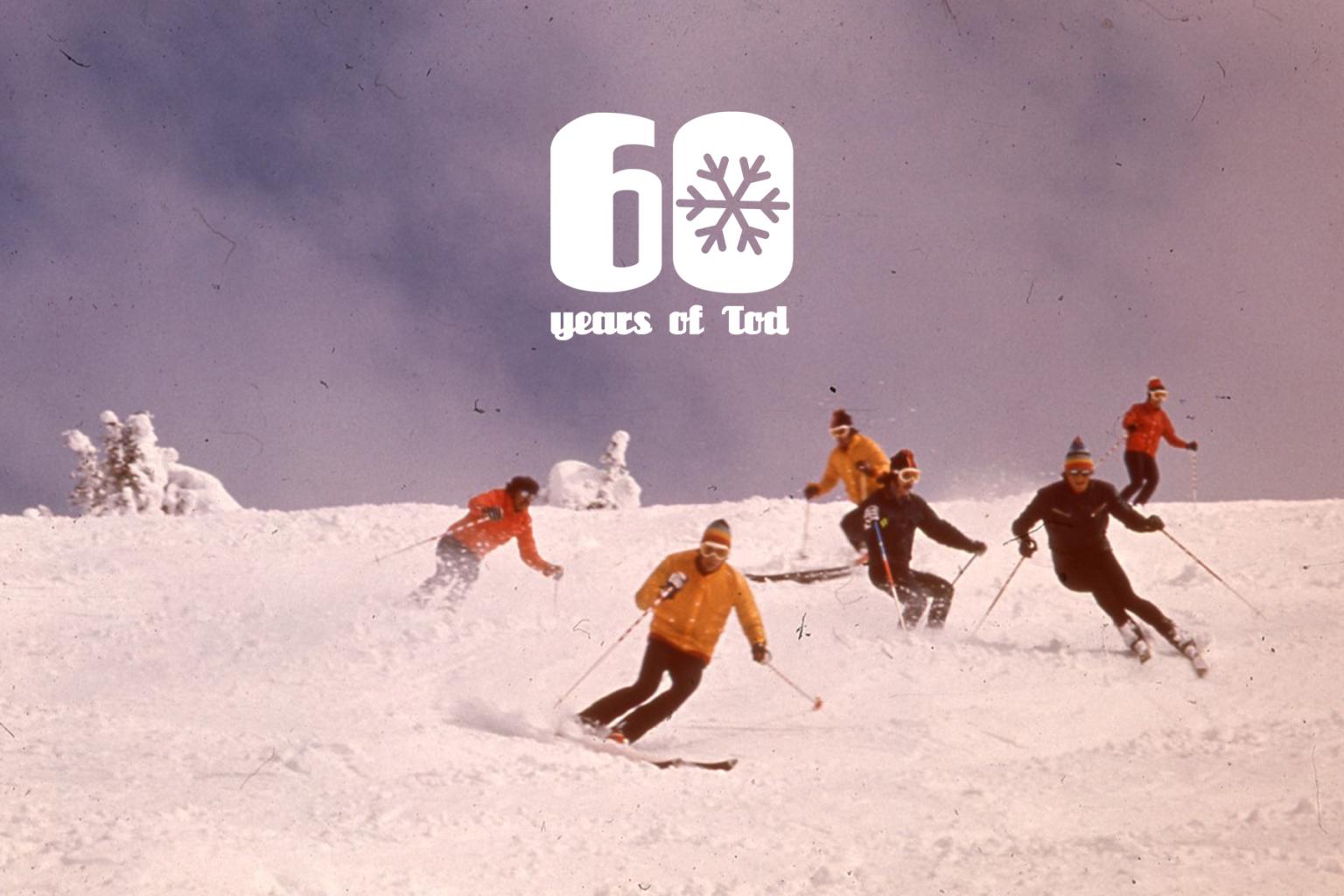 In May of 1959, five keen Kamloops skiers saddled their horses at Whitecroft Ranch and set off on a trail to the summit of Tod Mountain to explore potential new ski terrain. After reaching what is now Top of the World, they marveled at the snow-covered Crystal Bowl and began dreaming of a chairlift that would bring them back for lap after lap.

At 11:00am on Saturday November 18, 1961, their dream became a reality as Tod Mountain Ski Resort opened to the public. Tod Mountain’s brand-new double chairlift, which would later carry the Burfield name in honour of Harry Burfield who was a key figure in the establishment of the resort, was the longest in North America and gave skiers access to five original runs: Chief, Crystal Bowl, Ridge, 5 Mile, and 7 Mile.

In the decades since, a deep love for skiing (and later snowboarding), as well as the community spirit that surrounds it, has remained firmly entrenched in our mountains. While the name was changed to Sun Peaks Resort in 1993, the stories, people, and spirit of Tod Mountain live on to this day. We’re excited to celebrate the 60th year of skiing on Tod this winter and have been working on some special projects to help mark the milestone.

Earlier in the year we commissioned local Sun Peaks artist Zuzy Rocka to create an original artwork to commemorate this significant season. Titled ‘Dreams Aglow’, Zuzy’s beautiful piece captures her perspective of Tod, our village, and the nature that surrounds it. The bright orange and deep blue colour palette of the artwork was inspired by the the uniform patches historically worn by Tod Mountain staff.

Look for the original painting to be on display in the village this winter. 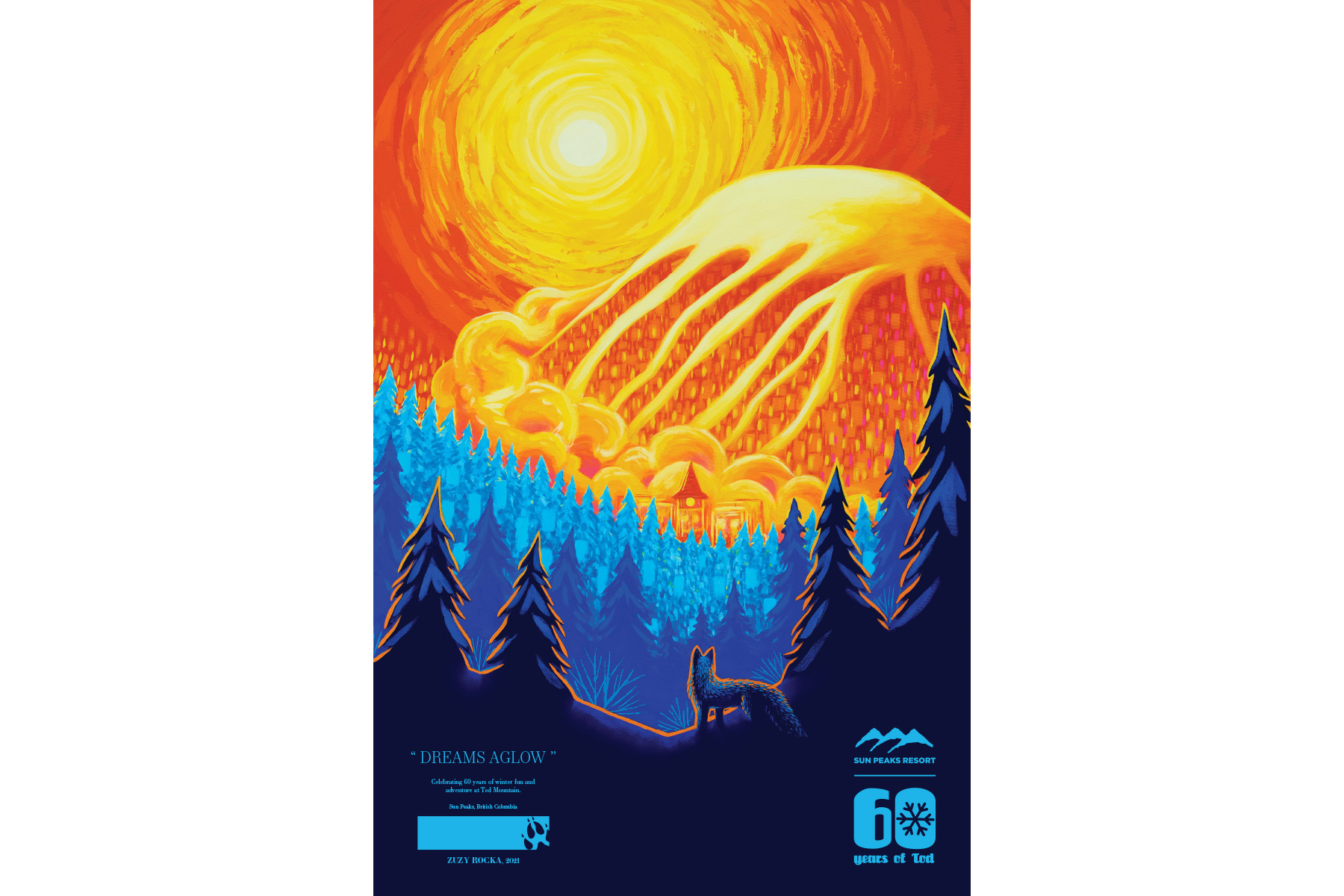 We love the artwork Zuzy has created, so we want to give you the chance to own a copy of it too. We’ve partnered with local business Alpine Images to offer two options for those looking to add this stunning piece of Sun Peaks history to their home:

To mark the 60th anniversary of Tod Mountain’s opening day we are releasing a limited edition run of 16x20" prints of ‘Dreams Aglow’. There will be just 60 of these prints available, each hand-signed and numbered by the artist Zuzy Rocka.

In addition to the limited prints, a non-limited 11x14" poster print version of the artwork will also be available at Alpine Images. Poster prints will be on sale from November 18 onwards for $40.00 + tax. 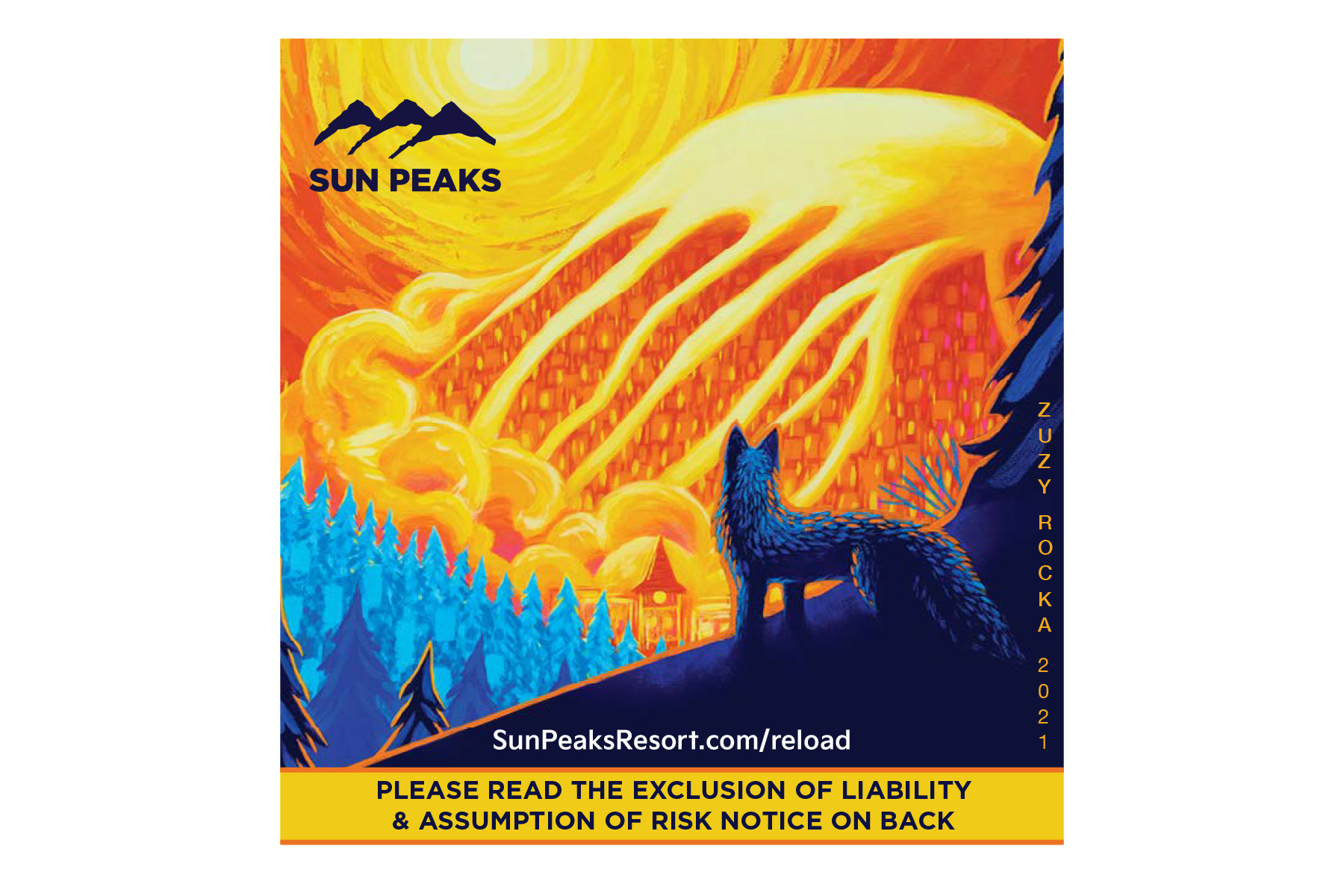 Another place to spot Zuzy’s art this season is on our 2021-22 Mountain Cards. Both lift ticket and season pass cards will feature the design, making them a great memento of season number 60 for those joining us on the slopes this winter.

The new RFID cards will soon be available at Guest Services for the regular $5.00 Mountain Card fee. 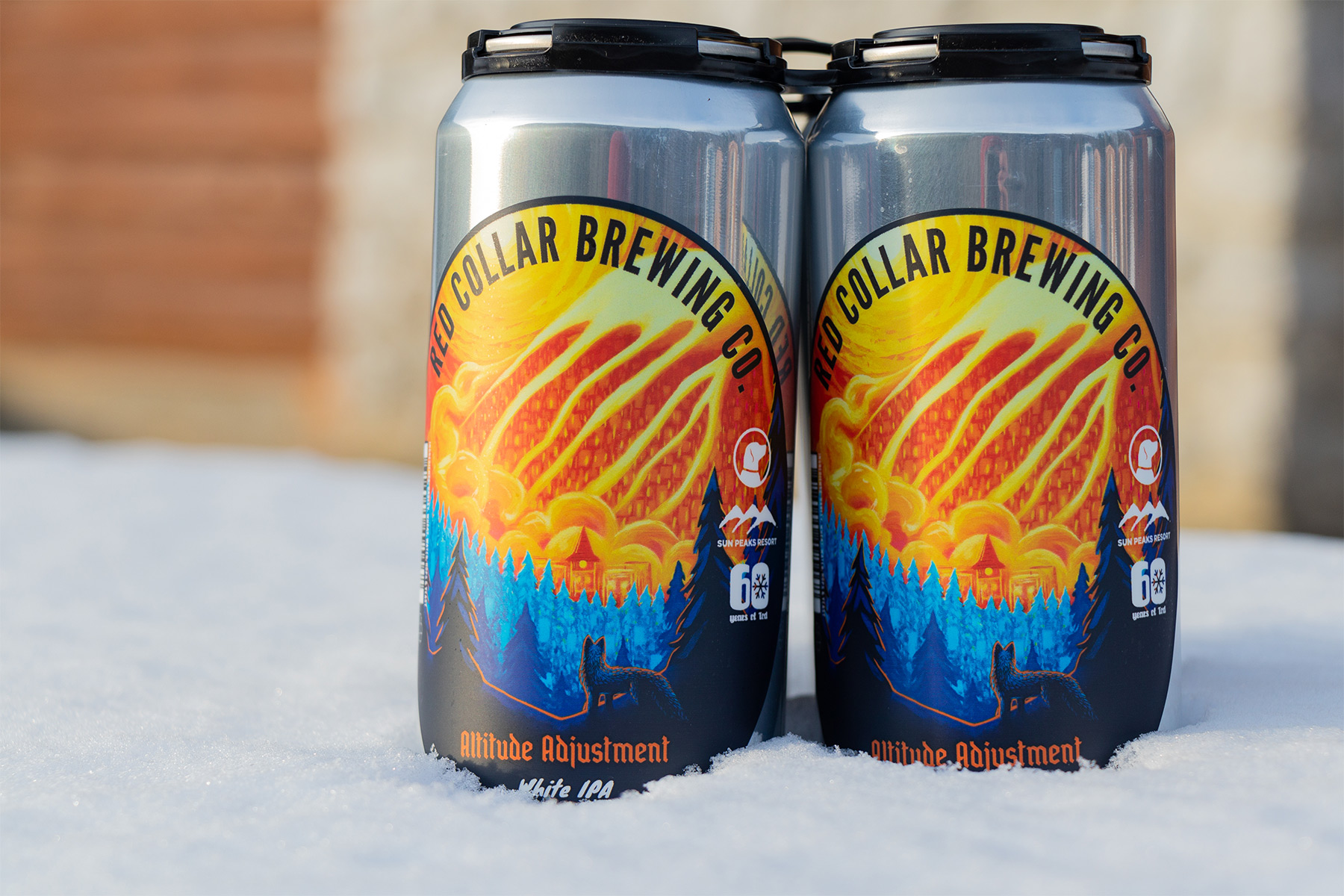 The obvious choice for après this season, keep an eye out for Altitude Adjustment on tap and in cans at Masa’s Bar + Grill, in the Sundance Liquor Store, and elsewhere throughout the village. Of course, you can also visit Red Collar’s brewery in downtown Kamloops for a taste, plus you’ll be able to find the beer at liquor stores in Kamloops and elsewhere in BC that stock Red Collar. 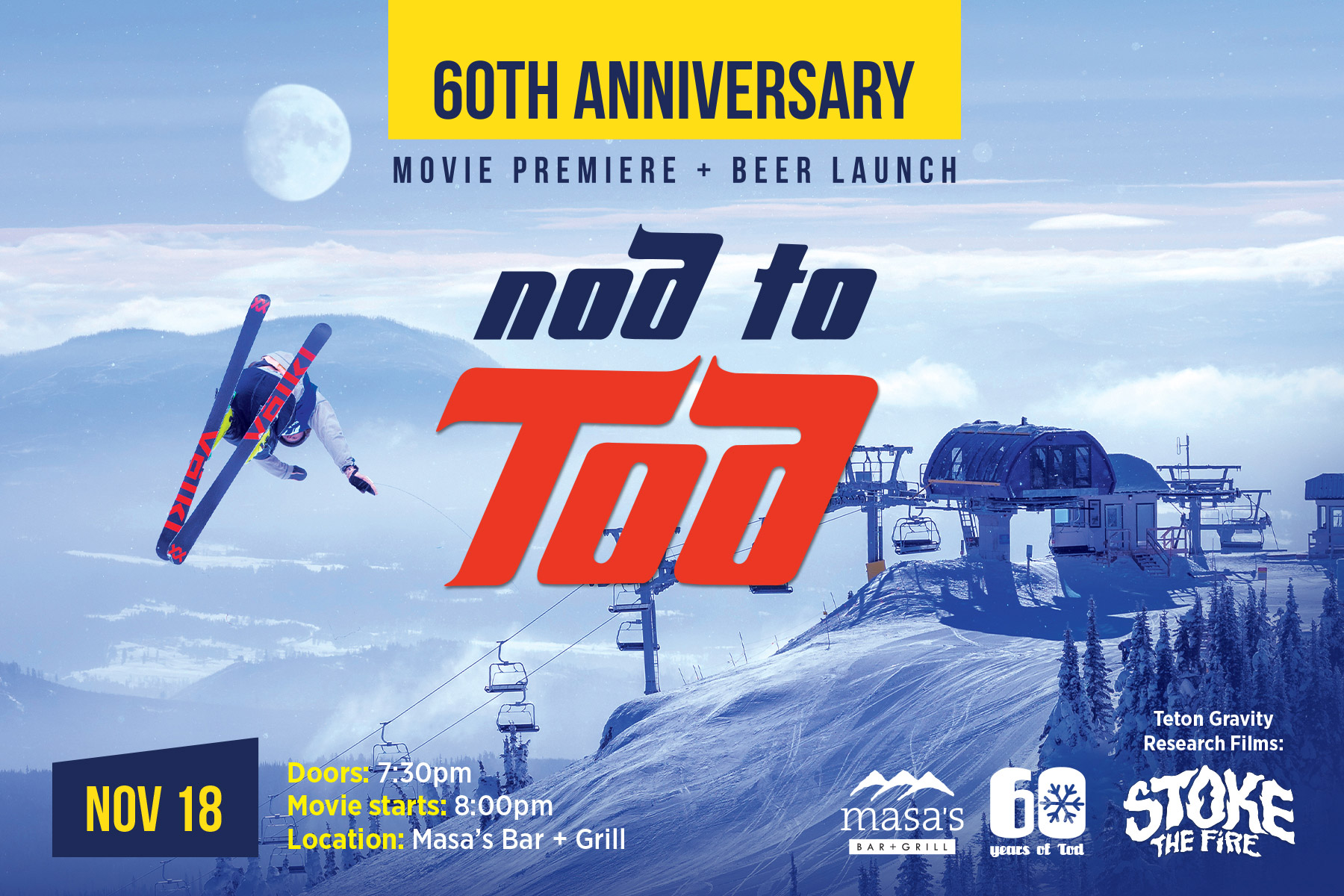 Thursday, November 18 is 60 years to the day since the opening of Tod Mountain Ski Resort, so we’re throwing a birthday bash for ‘old Baldy’ to celebrate. Join us at Masa’s Bar + Grill for the Nod to Tod party, featuring a premiere of Teton Gravity Research’s new movie Stoke The Fire and the official launch of our 60th anniversary beer.

Pre-season snow stoke and retro outfits are the theme for the evening, with plenty of prizes up for grabs (including for best outfit). Entry is by donation with all proceeds going to support the Sun Peaks Freestyle Club.

Beginning after the holiday season, take a stroll through the beautiful lobby of the Sun Peaks Grand Hotel, Sun Peaks Resort Guest Services, and participating local businesses to view an exhibit by members of ArtZone Sun Peaks. Submissions will profile the diversity of talent that is present in our local arts community and are inspired by our 60th anniversary season.

The exhibit will launch in early January. Stay tuned for further updates, including opportunities to meet the faces behind some beautiful pieces of local art. To get your art fix in the meantime, the 14th Annual Sotheby’s Sun Peaks Benefit Art Auction runs December 1 to 9, with all proceeds being donated to Adaptive Sports Sun Peaks.

We are thrilled to be working with the dedicated members of ArtZone to promote our local arts and culture community this season.

A mix of sun and cloud.