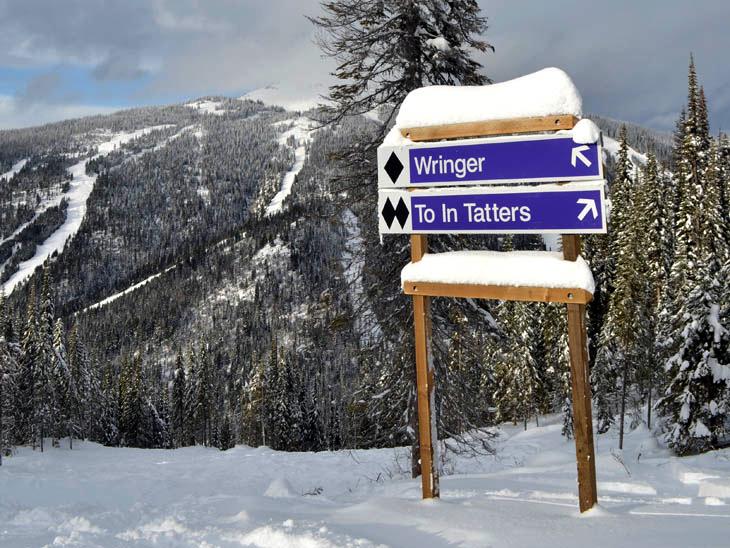 A lot has changed at Sun Peaks Resort since Jamie Tattersfield arrived on the scene. As the resort’s Operations Manager, Tattersfield helped grow the resort from a meager one-chair ski hill with a modest lodge to the world-class, three-mountain, four-season destination it is today.

Now boasting 12 lifts, including 6 chairlifts, Sun Peaks has grown from the modest Tod Mountain to include over 135 runs and one of the most revered mountain bike parks in the world. The amenities are top notch, but the village still has that classic mountain town feel.

“The way it’s designed, with the village core right in the centre of it all, people feel kind of safe there. It feels cozy,” says Tattersfield, who recently stepped away from his 43 years in the ski resort business (22 of them at Sun Peaks).

Tattersfield was recently honoured with the Jim Marshall Award, recognizing his contribution to recreational skiing. And Sun Peaks, as part of its massive expansion two seasons ago, named a new run after him, “In Tatters”. The expansion, which includes Gil’s Backcountry and the added terrain on West Morrisey, added a total of 500-plus acres of skiable terrain, positioning Sun Peaks as the second largest ski area in Canada behind Whistler Blackcomb, all thanks to Tattersfield and his team.

Not bad for a ski bum who, fresh out of college, lucked into a winter job driving a snow cat. We sat down with Tattersfield to look back on his incredible life in the mountains.

Congratulations on such a long, successful career in the mountains. Tell us how you got your start?
It may be a common story, but I went to visit my sister in Whistler in 1972. I’d just come back from a trip to Europe, and she was running a restaurant up there with her husband. I’d been skiing before, and I was kind of at a loose end in my life; I didn’t know what to do.

And when you got there?
I got a job as a night man at a hotel that doesn’t even exist anymore. I was in the bar one night and I met the grooming crew. There were only three cat drivers in Whistler at the time, and one of the guys had broken his leg. The supervisor asked if I wanted to try driving snow cats, and I said, ‘Sure I can try that.’ So I became the third cat driver. I was 21 or 22 years old, and Whistler was a really cool place. It still is, but back then, it was really cool, small and compact.

So how long did that last?
I worked seasonally until about ’76, and then I met this lady who was going to become my wife. I used to go to the Arctic in the summer and work on the sealift up there. But she wasn’t fond of me being gone half the year; so then I started staying around in the summer, doing maintenance or whatever. You have to understand it was a pretty small company back then. And I just kind of grew into it. The industry in those days was kind of a real mom n pop type affair, so everybody kind of did a little bit of everything. So I learned and I stayed and grew into the business.

Tell me about the early Mount Tod days.
When I left Whistler in ’92, it was going along, but they hadn’t quite rolled over into the big time yet. When I got to Tod, I really wondered what the hell I was doing. I think they were getting maybe 65,000 skier visits at the time, and it was declining. I’d never visited the place before, strangely enough. I knew quite a lot about the planning company that was involved, and I liked the new owner. I flew out to Kelowna to meet the general manager, and I liked him. It just seemed that change was as good as the rest. So I took the job and I’m extremely glad that I did, because it’s proven to be a great ride with them.

When I arrived there was an old tin building at the bottom and a bottom-drive double chair lift with a door hanging open with broken hinges and oil leaking out the door. I mean it was brutal.

What was the scene like when you arrived?
When I arrived there was an old tin building at the bottom, the day lodge. But the current base area, where the village is now, there really wasn’t anything there at all. The road just ended at the tin building. There was a bottom-drive double chair lift with a door hanging open with broken hinges and oil leaking out the door. I mean it was brutal. I went up for the first time in May or June, and there were almost tumble weeds bouncing down the road. Not a soul around. I didn’t know there was no gas up there, so I almost ran out of gas on the way back.

A lot different than the world-class resort it is now.
Everything improved from then on. When I hit the ground there in the June of ’92 it was full on, and we built so much so quickly. The pace of change was so rapid compared to anything I’d seen before. The owner was fully committed to building a first-class resort, and it quickly became obvious just how committed he was.

You were the operations manager for 22 years. What does that entail?
What doesn’t it, I guess? And I mean, that job grew with the resort, too. In the end it included the golf course operations, basically everything that was outdoors. But once again, a very flat management structure; all the operational duties were shared between myself and the chief financial officer. There was a real estate manager and a marketing director, plus the general manager, and that was it.

The pace of change was so rapid compared to anything I’d seen before. The owner was fully committed to building a first-class resort, and it quickly became obvious just how committed he was.

What were some of the highlights for you at Sun Peaks?
I think just watching the resort develop. If you look back at the master plan we’d developed for the resort we started with, then hop forward 22 years and look around, it’s all there. It wasn’t like it was an ad hoc development; it was all very carefully planned and phased and timed and it all fell into line. So that stands out for me.

What initially drew you to the area?
The job. I grew up on the west coast in North Shore of Vancouver, and Kamloops to me at the time was just a wide spot on the road where you stopped for gasoline on the way to somewhere else. I didn’t really know much about it. But when we did move here, I was struck by the friendliness of the people, and their commitment to the area. It’s a great place to live—incredible people and outdoor activities of all kinds. And the city of Kamloops itself has everything you need. It’s a good spot.

You’ve seen a lot of resorts around the world, what is it about Sun Peaks that makes it special?
It’s starting to really come into its own now. It’s a combination of a few things: its proximity to the city is key, you need to have that base population; good transportation links are important and Kamloops serves that need; and the highway network brings people in from all over Western Canada.

It’s got these three mountains in a circular setup so you can ski in a circle right around the village, up and down lifts. It’s got that ‘white circus’ idea. There aren’t too many resorts where you can do that…The way it’s designed, with the village core right in the center of it all, people feel kind of safe there. It feels cozy.

What about the terrain?
The geography of the place is really quite unique. It’s got these three mountains in a circular setup so you can ski in a circle right around the village, up and down lifts. It’s got that ‘white circus’ idea. There aren’t too many resorts where you can do that. Maybe a few in Europe. The way it’s designed, with the village core right in the center of it all, people feel kind of safe there. It feels cozy. I’ve never talked to anybody who’s visited for the first time and said they’re never coming back. Everybody who visits puts it on the return visit list.

This year Sun Peaks honoured you with your own run. How does that feel?
I mean, it was astounding. The whole time I was part of the management group, I’d get all kinds of requests to honour somebody and name something after somebody, but I was always like ‘we don’t want to turn this into a mausoleum’. But certainly I was astounded; it was a very nice thing to do. And I like that it kind of fits in with the Laundromat theme of the other runs in the area. If you didn’t know, you wouldn’t know it was named after me.

I don’t know where these names come from—some after your second scotch, some after your third beer…If you didn’t know, you wouldn’t know it was named after me.

The Laundromat?
When we started building the ski runs on Mount Morrisey, we were building quite a lot of runs at the time, and you have to come up with names for them. I don’t know where these names come from—some after your second scotch, some after your third beer. But we ended up with names like Agitator, Static Cling… so when we started expanding Mount Morrisey, we just kept with the program: Tumble Dry, Wringer and now In Tatters.

You also received the Jim Marshall Award last year, recognizing your career.
That really knocked me back. That was a great honour. I’m still a bit speechless about that. The most honest flattery comes from peers, doesn’t it?

And now you’re retired. Do you miss it?
I do, but I’m still involved, I still put my two cents in it. The guy who replaced me enjoys talking to me, and my wife and I are out there skiing about three times a week. I just got back and boy it was a bit nippy. But I’ve got lots to do; we’ve been traveling around. When I think back to when I got into the ski industry, I was in my 20s, and the guys I reported to were in their late 20s, the owner of the area was maybe 50—it was young. Then all of a sudden you wake up one day and realize you’re passing 60, and you’re still training people that are 20. It was great. I’ve had a hell of a career, from something I got into rather accidentally and it’s something I’ve very much enjoyed.

I’ve had a hell of a career, from something I got into rather accidentally and it’s something I’ve very much enjoyed.

Is growth like we saw from Mount Tod to what Sun Peaks is today even possible these days?
I’m sure it is. If I could quote a contemporary of mine, Roger McCarthy (check), he has a little thing called the rule of three. So if a ski area is to be successful it has to be three hours from three million people, and you have to be the third owner.

What does it take to stay in the industry and work and live in the mountains for over 40 years?
You have to like it, obviously; you’re not going to make a fortune. I mean, you can do well, but it’s not a fast way to riches, that’s for sure. You’ve got to like the lifestyle, like the being outside and really like people. So if you like those things, then why not.