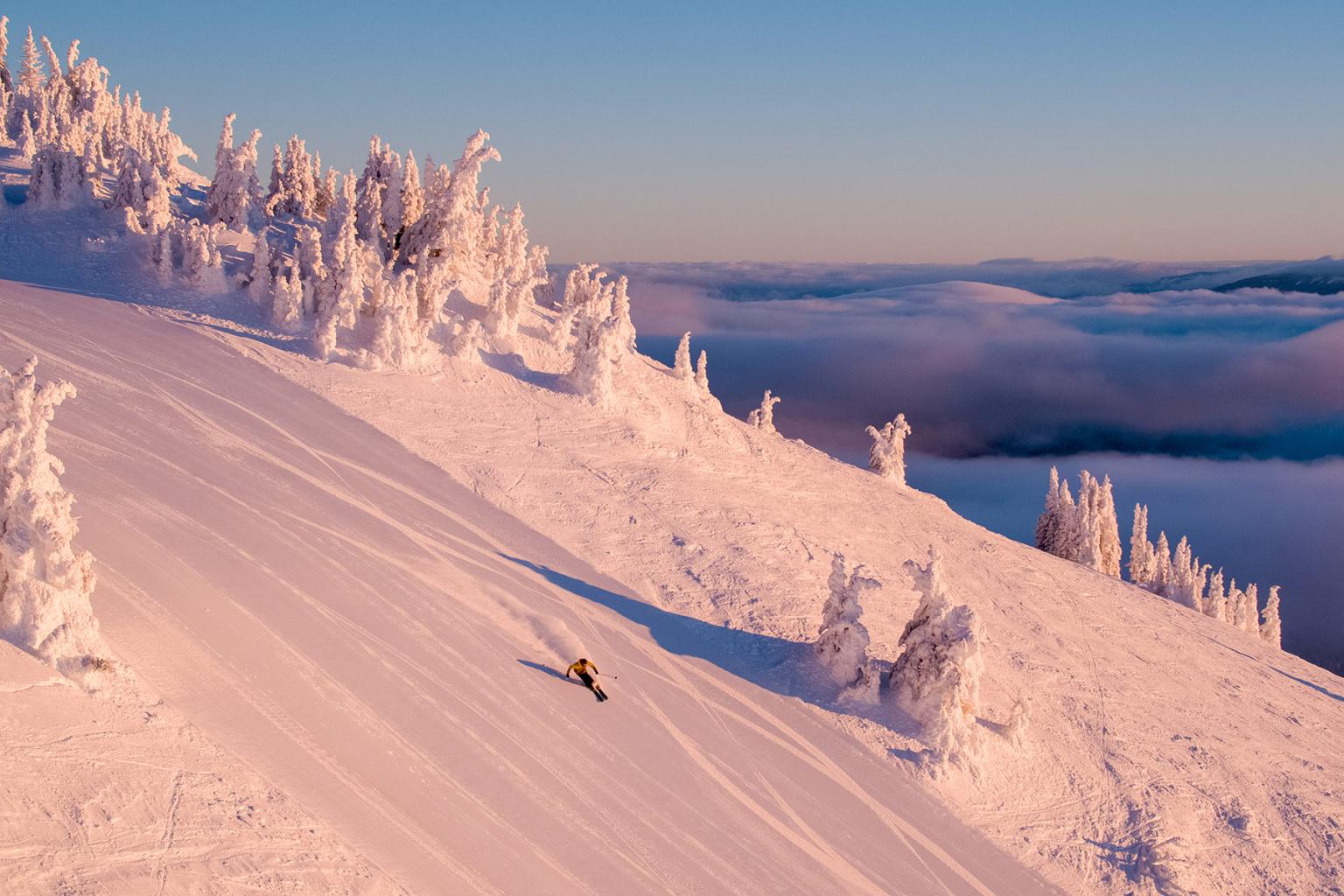 It’s hard to beat the stunning views from amongst the snow ghosts at the top of Tod Mountain. Indeed, back in 1959 it was this same view that first inspired the founders of Tod Mountain Ski Resort.

Sitting at the summit of twin chairlifts Burfield and Crystal, Top of the World is the highest lift-accessed point in Sun Peaks and offers up fantastic views of, well, everything.  On clear days skiers and snowboarders are treated to sweeping 360-degree views, revealing iconic BC landmarks like Shuswap Lake, Dunn Peak, and the Coast and Monashee Mountain ranges.

Top of the World is also the gateway to some of our most challenging terrain. After a day spent hunting for powder stashes, charging the steep 'n deep, and soaking in the vistas it's easy to see why this is such a popular area of the resort.

The Burfield chairlift is where it all began. Built originally as a double chair, the Burfield first opened in 1961. In the 60 years since it’s suffered mishaps with wind and a fire, but has persevered through it all to continue bringing eager skiers up to the goods at Top of the World. The current, quad version of the chairlift was installed in 1998.

Fun fact: When it first opened, the Burfield was the longest chairlift in all of North America. It still ranks in the top ten today.

The original Crystal, a triple chair, was installed in 1979. After 40 years of service, that lift was recently retired and the new version of Burfield’s partner at Top of the World, an updated quad, opened at the start of the 2020-21 season.

Favourite Runs at Top of the World for:

One of the best features of Sun Peaks for families or groups of mixed ability is that there is a green run from the top of every lift. 5 Mile serves that purpose at Top of the World, giving even beginner skiers the ability to head up to the very top of the resort to enjoy the views before cruising back down.

If powder is what you’re searching for then it’s hard to go past Gil’s. Nestled in behind Top of the World, this is a hike-in area of the resort where fresh flakes stack up sheltered from the wind and sun. With plenty of lines to choose from, you can drop into some of the deepest turns in Sun Peaks, harvest side hits galore on the ski out on The Other Way, then lap back up to the top to do it all again.

Hiking not your thing? Kookamungas and other runs off the back of the Chief ridge are another great spot to hunt for powder turns among the trees.

There are few better feelings than sinking your edge into a canvas of perfect cord above the clouds. On a clear day at Top of the World, Blue Line serves this up in spades. Show off your turns next to the chairlift as you carve your way down this fast blue.

Spillway is another local favourite groomer in this area of the resort.

Fans of the steeps should make their way to Headwalls after their trip up the Crystal or Burfield. Stop at the top of the run to admire the views of Sundance, Morrisey, and the village, before pointing your skis downhill and enjoying the ride. The treed runs to the side of Headwalls like Chute and Hat Trick provide plenty of fun advanced terrain too.

If you’re keen to shred some Sun Peaks history with a top-to-bottom Burfield lap, add Challenger to your hit list. This steep ‘n deep classic has been keeping skiers and snowboarders on their toes for decades.

Situated near the base of the Burfield chairlift is Peaks West, Sun Peaks’ newest neighbourhood. Along with several rows of residences, Peaks West is home to a selection of shops, including options for grabbing food on your way to the lift. Ohana Deli Market & Deals To-Go serves up coffee, sandwiches, and other meals to go, perfect for fueling up on your ride to the top. Just next door, the Magic Cattle Guard Diner cooks up a hearty breakfast menu on Saturdays.

Once you're on mountain, you can stay up top all day without going hungry thanks to the Sunburst Bar + Eatery's breakfast and lunch offerings.

It’s back to the Magic Cattle Guard at the end of the day for a tradition as old as the Resort itself: reminiscing about your alpine adventures over drinks at the base of Tod Mountain. With walls adorned with historical photos serving as inspiration and a tasty lineup of beers on tap, you’ll find yourself swapping tall tales with the Cattle Guard’s locals in no time.