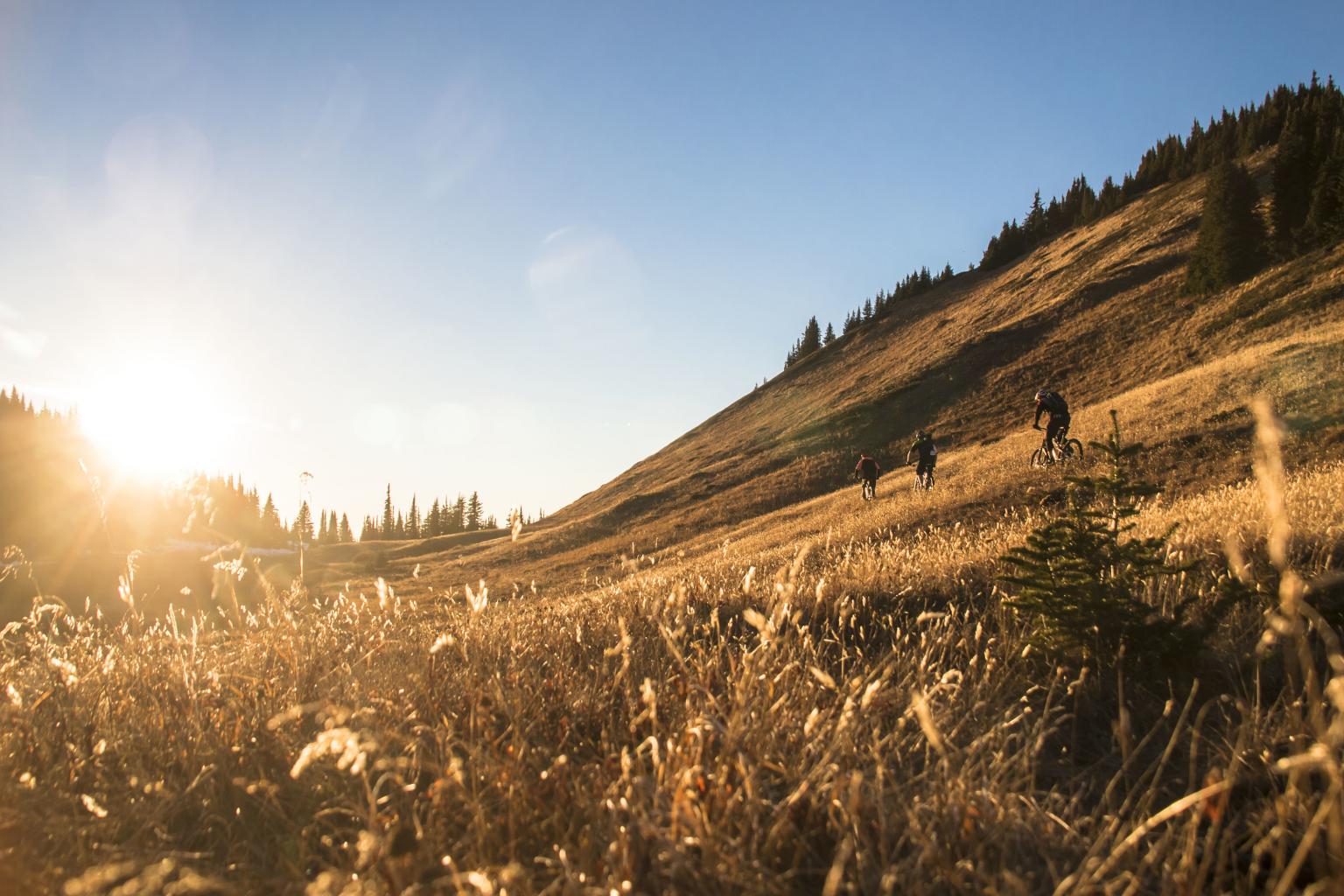 By Kristin Warkentin (June 2017) via explore-mag.com

Grassy meadows, mountain lakes and some of the most technical riding in B.C. make Sun Peaks Resort a mountain biker’s paradise. From mid-June to early September, the resort boasts sick trails, awesome events, delicious nachos and a welcoming community. Whether you’re in it for the crazy fast downhill park, the aggressive all-mountain trails, or the scenic cross-country options, Sun Peaks has something for everyone.

And not many people know better than Dylan Sherrard what the resort has to offer. Sherrard has been riding Sun Peaks, and living in nearby Kamloops, for the past decade. Drawn to Sun Peaks by the many mountain biking films that featured the area, he quickly got involved in the local scene.

Sherrard now runs an annual summer riding camp called Shred Hard that brings together local youngsters and kids from as far away as Washington State, Vancouver Island and northern B.C. to learn new skills and make new friends. “We spend quite a bit of time on skill development,” Sherrard explains, “but we put a much bigger focus on creating friendships between people and taking a minute to appreciate how lucky we are to be enjoying such rad mountain bike trails.”

If you want the inside scoop, Sherrard is the guy to talk to. We grilled him (in a friendly way, of course) and came out with this quintessential local’s guide to riding at Sun Peaks.

Read on to make sure you’re not missing out.

“As far as my personal favourites go,” says Sherrard, “my top downhill trail would be just linking up the downhill race course that they use for nationals.” (That’s the Canadian Mountain Bike Downhill Championships that were hosted at Sun Peaks from 2014 to 2016). The trails to link up are: DH, Insanity One, Sticky One, and Resurrection.

“My favourite cross-country trail would be Altitude (XC), which pedals from the top of the park out to Tod lake,” explains Sherrard. “You pedal all across the west bowl of the mountain and you get these wicked sunsets and there are tons of grassy fields once you’re out there. You’re kind of grinding the edge of the treeline and that’s always a cool place to be.”

For the best kid-friendly option, Sherrard recommends Smooth Smoothie. “That one’s gotten to the point now where it’s a really great trail to get your feet wet with mountain biking because there are cool berms on it and little table top jumps,” he says. “You can sort of roll down it as a total beginner or you can roll down it as someone who wants to hone some new skills too.”

Best Trail for an evening Ride

On a warm summer’s evening, Sherrard likes to ride from the village to McGillivray Lake along some of the mellower trails. The elevation gain is minimal and riders can relax on the docks once they arrive at the lake. “It’s just a nice time,” says Sherrard.

You don’t have to be an experienced rider to enjoy mountain biking at Sun Peaks. “If it’s something totally new for a person, Sun Peaks actually has a pretty cool staff of people who are ski guides in the winter. And they take on intro to mountain bike lessons in the summer,” explains Sherrard. “They have such a storied history of spending time teaching people to ski and how to deal with mountain environments that they just make your first mountain bike ride feel like a mellow treat.”

Lessons can be booked through Elevation Bike, Ski & Board.

Coolest event of the season

Sherrard doesn’t hesitate to name the three-day-long Peaks Pedal Fest that happens on Labour Day weekend. “That’s a very easy favourite because up in that alpine environment, it’s pretty well autumn,” he says. “So it rains a little bit and it’s nice and cool and sticky on the trails.”

But the event is about more than great riding. “It’s basically just a big party where everyone comes together and kind of has a last hoorah before we kick it into mellow gear for the autumn and the winter. It’s kind of this rad time of year to celebrate having a busy summer season.”

Coolest (un)official event of the season

“It’s basically a cult following style of riding where nobody really does it, so we just call it the world champs.”

One local rider is particularly passionate about the sport, so taking the victory isn’t easy. “It’s always a bit of a legend.”

“I will never tell,” Sherrard states jokingly — sort of. But his friendly nature quickly softens him. “If there’s a secret, it might be that mid-week there’s rarely a lift line. So it’s almost like you’ve got the park to yourself if you can make it up.”

Shhh - you didn’t hear it here.

Après-ride: where to hang out and refuel

You've done some serious shredding and now it's time to relax. Where to go? “We have a pretty good fan following for a place called Bottoms Bar and Grill,” says Sherrard. “They’ve got a wicked patio, so you can actually watch people rallying on the mountain cart track [a downhill mountain cross go kart track] right next to it. You hear people burning out sideways and then everyone gets stoked to look over and see who’s crashing into the pits. It’s just an awesome spot to hang.”

“I really wouldn’t say that the place is very cliquey at all,” says Sherrard. “So if you show up with a bike and a smile on your face and you aren’t being a jerk about anything, then you’re probably going to make a bunch of friends right away.” After a pause, he adds, “Maybe don’t skid on the berms. That makes people upset.”