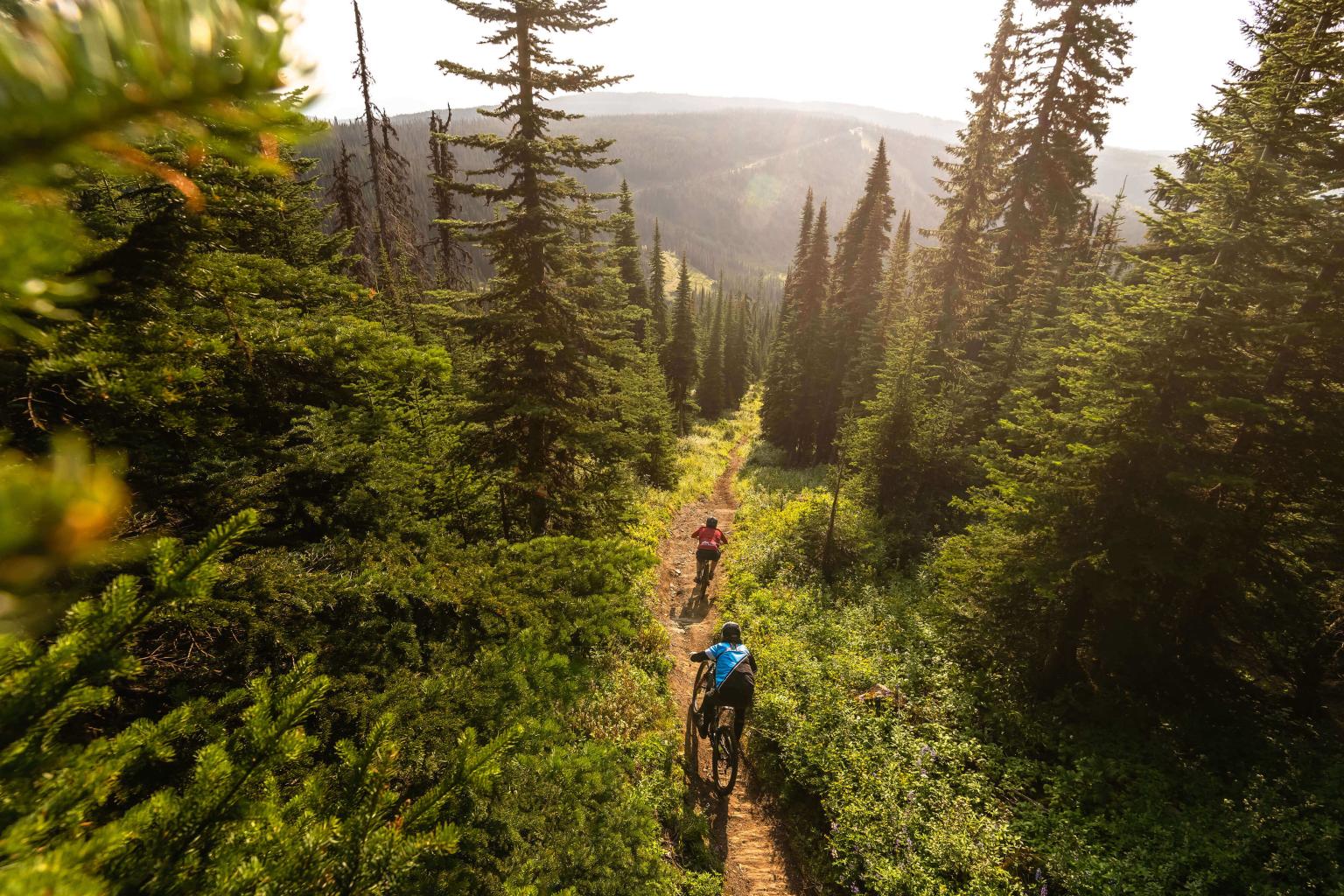 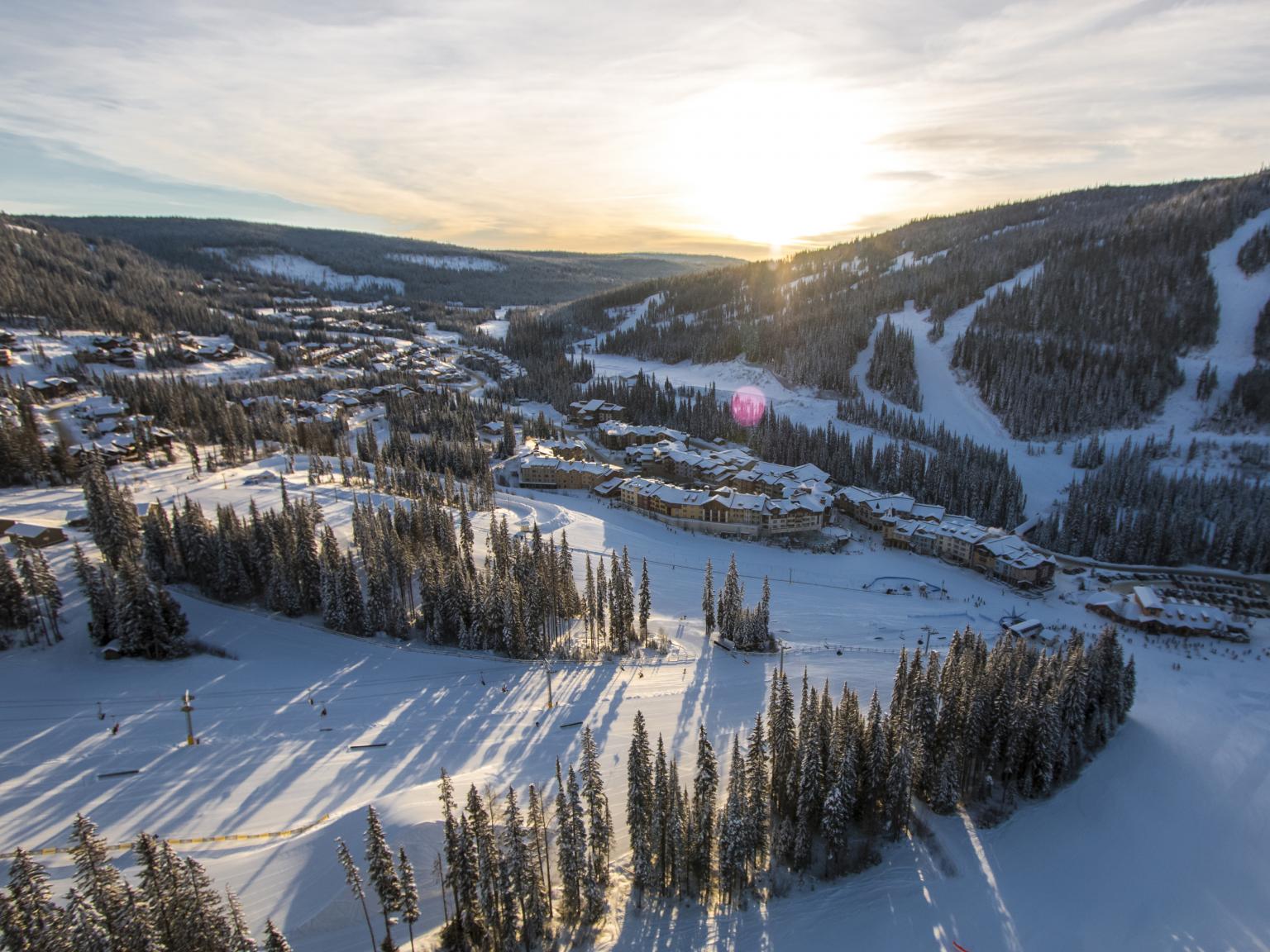 Vacation planning. For some it’s as exciting as 40 cm of fresh powder; for others, it’s an arduous slog of online researching, scouring reviews and price matching—especially when embarking on a journey to an unknown resort.

Broadus, her husband and their daughter spent the New Year’s holiday north of the border, basking in a Canadian winter wonderland under the mountains of Sun Peaks, Canada’s second largest ski area.

“It was great,” says Broadus. “We got to see the excitement of the holiday weekend, and all the events. There were fireworks over the mountain, and even a lighted torch run with people skiing down the hill with torches. It looked like a dragon-snake all lit up. It was really cool.”

Broadus, with many more stories to tell about her trip, shared with us five reasons to consider Sun Peaks when planning your next vacation.

As a busy professional, Broadus is used to planning, planning and more planning. Sun Peaks’ easygoing feel enabled her to let go and relax on her vacation. And isn’t that the point, anyway?

“The vibe is laidback and approachable,” she explains. “It’s nice to not have everything so planned out and on a schedule. At all the restaurants, even on that busy weekend, we could just walk in and get a table. We could just relax, let go and truly be on vacation.”

It’s nice to not have everything so planned out and on a schedule. We could just relax, let go and truly be on vacation.

Another convenience: with everything a vacationer could ask for within walking distance, there really is no reason to rent a car.

“The shuttle to Sun Peaks is totally easy, and although we opted to rent a car, we actually ended up being behind the shuttle the whole way from the airport. Hindsight is 20-20, but I think we would have just used the shuttle. The great thing about Sun Peaks, compared to a lot of other mountains, is most of the stuff is right there, in the village, so we didn’t get into our car other than to leave.”

Initially, Sun Peaks appealed to Broadus for its inclusivity; the resort caters to people of all interests and abilities, but especially families.

“If you’re a super extreme sports person, you can totally get into that,” she says. “But at the same time, we have a daughter, there’s childcare at Sun Peaks, and my husband and I can go skiing, she’s having a great time, then we can pick her up and go sledding. It’s very good for families.

“But at the same time,” she concedes. “I could see my husband and a bunch of buddies going up there for a guys’ weekend.”

As anyone who’s visited the B.C. Interior will tell you, it’s a stunningly beautiful piece of Canada—quaint and friendly with stretches of blanketed valleys flanked by rolling hills and white peaks.

“The town of Kamloops is fairly small,” Broadus says. “And the airport is really small. Getting on the highway to Sun Peaks, the first things I noticed were the horses and the wide-open space. Coming from Los Angeles we just don’t ever see that. It had just snowed, so everything was covered in a beautiful blanket of fresh white. We saw some sheep, it was a bluebird day, just gorgeous.”

The winding mountain valley roads and the vistas they carve through are signature Interior. And with wide-open spaces, very little congestion, friendly locals and fantastic snow quality, Sun Peaks offers up a truly relaxing mountain experience for die-hard skiers, first-timers and families alike.

“It was actually my daughter’s first international trip,” says Broadus. “She’s still a wee little girl, and it was a fun way to experience the holidays in a pretty unique, Canadian way. Just to see her in the snow, and on the sled was really fun and completely different than my own childhood.”

Reason #3: Variety is the Spice of Life

Sure, Sun Peaks offers world-class skiing, but for those looking for something more out of a vacation, the resort offers a smorg of options.

“There’s a lot to do at Sun Peaks other than skiing,” Broadus explains. “A lot of times, not everybody in your party might want to ski or snowboard, so having those other activities is really nice.”

The highlight for Broadus was the Moonlight Snowshoe & S’mores tour, where guests embark on an easy 1 km snowshoe tour and guided trek through Sun Peaks’ enchanting forest trails. Guests then enjoy a roaring fire, hot apple cider and s’mores at a cozy winter camp.

It was my first snowshoe tour, and it was great to have someone leading us who knew a lot about the area to give perspective about Sun Peaks and its mountains… You look up and there are so many stars—all the constellations—and you hear the sounds of the mountain, the wind in the trees. It’s a great experience.

“It was my first snowshoe tour, and it was great to have someone leading us who knew a lot about the area to give perspective about Sun Peaks and its mountains,” she says. “You look up and there are so many stars—all the constellations—and you hear the sounds of the mountain, the wind in the trees. It’s a great experience.”

While there are many options for things to do at Sun Peaks—Nordic skiing, ice fishing, horse-drawn sleigh rides, a variety of dining options (Broadus says the Mac & Cheese at the Voyageur Bistro is a must), shopping, ice skating, snow biking, snowmobile and dogsled tours and tubing—for Broadus’ husband it was all about the First Tracks Breakfast.

“He did it a couple times,” she says. “Just watching the sun rise over the mountains, that perspective, he said it was just unbelievable. carving first tracks on the mountain is always really fun.”

“Initially what piqued my interest in Sun Peaks was the terrain,” says Broadus. “My husband is a fearless skier. He’ll go on double black diamonds and into backcountry. He just doesn’t feel like a trip is complete if he doesn’t.”

But Broadus admits she’s more of a timid skier, which at many other resorts has left her feeling abandoned.

You can go almost to the top of the mountain and still ski down greens or blues, and that’s really unique within a lot of North American ski resorts.

“I really enjoy being on the mountain, and being on the lifts and going down the runs,” she says. “But I still have a level of fear inside me. I like Sun Peaks because you can go almost to the top of the mountain and still ski down greens or blues, and that’s really unique within a lot of North American ski resorts.

“A lot of times at other resorts,” she continues, “I feel like I’m being left out. Everyone is experiencing the top of the mountain and the view, and they have so many options for runs. The amount of beginner and intermediate runs at Sun Peaks really is substantial.”

There’s also the bonus of shorter lift lines and less crowded slopes. For anyone who’s got a short window to enjoy a mountain, this can be crucial.

“It was a great alternative to the crowds at some bigger resorts,” Broadus explains. “The good thing about Sun Peaks is there’s a whole other side, across from the main mountain, Mt. Morrisey, a lot of the time not many people are over there, so you can be the only person on the run.”

It was a great alternative to the crowds at some bigger resorts.

As many mountain lovers know, a week at a resort can hit the pocket book pretty hard, adding even more anxiety to planning a vacation. But with Sun Peaks’ Ski & Stay packages starting as low as $149 per person (including a lift ticket) at a world-class resort, vacation doesn’t need to break the bank.

“When we calculated the price of accommodations, plus the crowd factor, Sun Peaks stood out as the ideal vacation,” says Broadus, who was happy to share some of her travel tips to first timers.

“First thing’s first, I would book a room at the Sun Peaks Grand, the main hotel,” she says. “They have a restaurant and two rental companies on site, so you can take care of all your gear while being inside.

“Ask for a mountain facing room,” she adds. “It was really nice to be able to wake up and peek outside to see what the lifts were doing and how the weather was.”

For Broadus and her family, Sun Peaks was a once-in-a-lifetime experience—but not for long. She’s already planning to return next season.

“Absolutely we’re coming back, and next year, my daughter will be old enough to get into one of the ski camps. We’re so looking forward to that.”